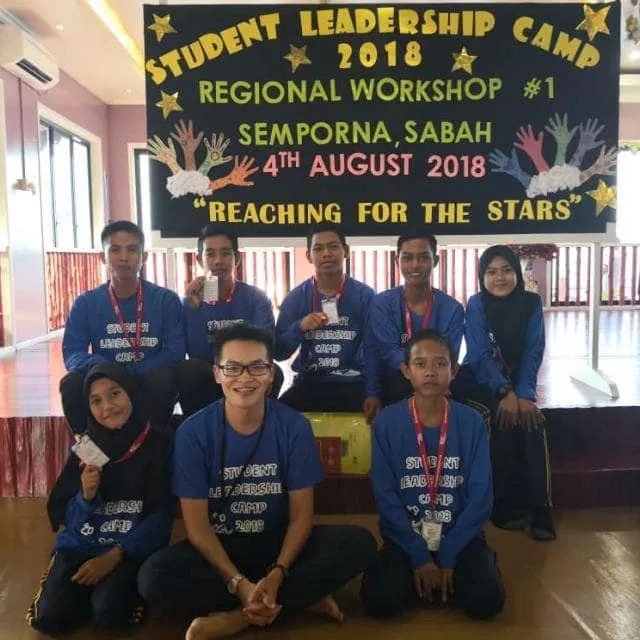 From Sabah, To Sabah: Giving Back The Teacher Way

Desmond and his STEM (Science, Technology, Engineering, Mathematics) club founded in 2018, which is now funded by Accenture after the Accenture Student Leadership Camp. 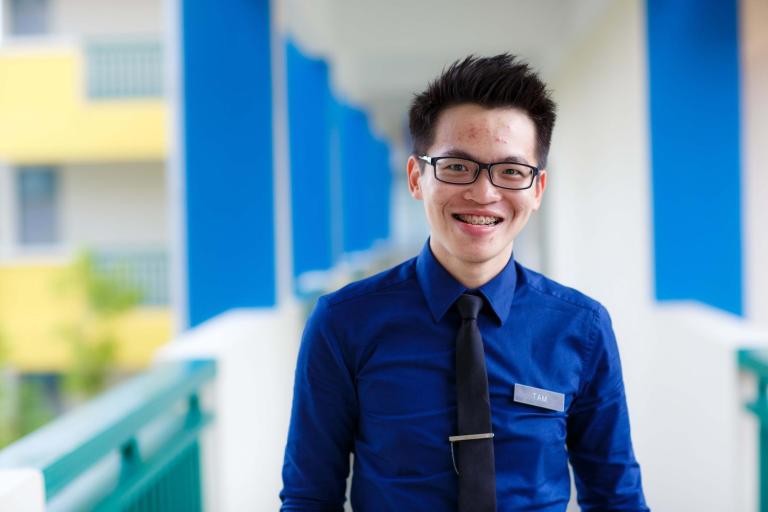 Desmond, who is Sabahan born and bred, has always wanted to be a teacher, ever since childhood. By his own admittance, he was fortunate to have been born into a middle-class family, which allowed him to complete his education and pursue tertiary education on a full scholarship from Shell. He completed his undergraduate studies at Taylor’s University, graduating with a Bachelor of Quantity Surveying (Hons).

As Desmond went through his tertiary education, he wondered how he could contribute back to his community in Sabah. Through his own life experiences and lots of heavy reading, he began to realise that the best way to give back is through education. From a team leader of the AIESEC, a leadership programme that develops youth through cross-cultural experiences, Desmond learned about Teach For Malaysia (TFM) and decided to take the next step of applying to the Fellowship.

“I joined the Fellowship because I wanted to understand the public education system and the issues my community face better. I also wanted to build my leadership skills, so TFM was the perfect platform to give back to the community while also developing myself in the process,” he says.

The Ups and Downs of the Fellowship 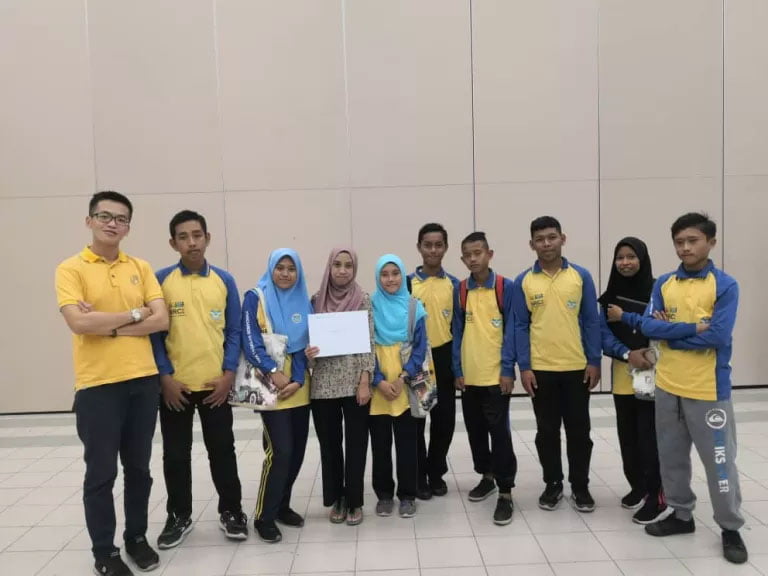 Desmond and the student team that went to the Young Innovators Challenge (YIC) in Kota Kinabalu. It was a long 12-hour journey to the venue, made tougher by the team’s bus breaking down! While the team didn’t win this time, they remain optimistic for future competitions.

Placements for the Fellowship are determined by the Ministry of Education. Upon news of his Fellowship placement in Semporna, Desmond and his family were apprehensive about him going there to teach, as Semporna is known for its pirate activity as well as previous militant group kidnappings. After much consideration, he decided that if he was going to give back to his community, he should be willing to do it anywhere.

When asked what the difficult parts are in the Fellowship, he says that handling other commitments, such as school roles (class teacher, Sports Day Lead), administrative paperwork, and Postgraduate Diploma of Education assignments, are his biggest struggles. The fact that some of these school roles tend to happen at the last minute does not help the situation. He also had occasional struggles with migraines and his mental health during very high-stress periods. These periods were made easier to go through with the support of his Leadership Development Officer (LDO), who listened and counselled him from an objective point of view. He also confided in his friends and family which helped him get a grip on things.While it was tough, he did find that these experiences helped him develop his time management and stakeholder management skills, and to become more resilient to the stresses of everyday life. His motto when pushing through hard times is this quote by Jim Kwik: “If an egg is broken by an outside force, life ends. If broken by an inside force, life begins. Great things always begin from the inside”.

“The Fellowship journey has and continues to be a flurry of ups and downs. But the thing I enjoy about the Fellowship is the fact that TFM as an organisation has provided lots of opportunities to Fellows to increase their pedagogical and soft skills. I signed up for a lot of these sessions and I can see steady but progressive growth in students’ attitudes, teamwork and communication skills, all by using the knowledge I gain from these sessions. Not only that, I enjoy the fact that I can provide unique opportunities to my students through the TFM platform, which is not easy to come by in a rural place like Semporna. My heart especially goes out to the weaker students who usually do not get opportunities to be involved in much, and also the stateless kids who don’t even get to sign up for anything due to their lack of an identity card. So, I usually focus on these groups of students and try to involve them in as many activities as I can,” he says.

Helping Students & Giving Back to the Community

Desmond is always trying to encourage growth in his students, by motivating them to step out of their comfort zone and try new things, even if it feels nearly impossible to them. He also provides opportunities for “troublesome” students to contribute more meaningfully in school. Here are two stories that he shared.

“Mazwyn was a shy student in my class who barely spoke any English. With the encouragement of my fellow TFM colleague Ninaviana (2018) and myself, he started joining STEM-related activities such as learning to use Arduino (an open-source electronics platform, for making interactive projects). After learning the basics of Arduino, he participated in many competitions such as the Young Innovators Challenge (YIC) and Accenture Student Leadership Camp. For the latter, he and his team actually managed to reach the finals held in Kuala Lumpur! Throughout this journey of preparing for, and taking part in various competitions, he became more and more confident, speaking up and presenting as much as he can despite the fact that his English was not that fluent. I am very proud of him and through him, I learned that small but persistent encouragement can change a student’s capabilities.” 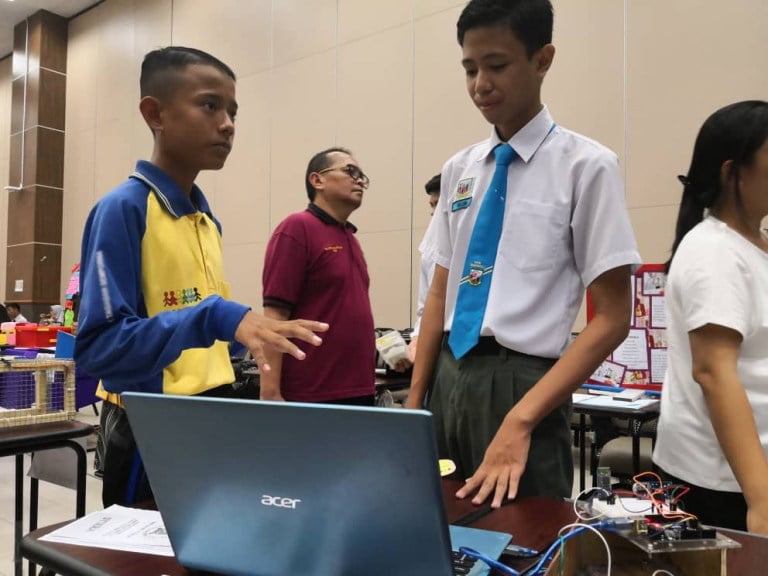 Even though communicating in English is not his strength, Mazwyn tried his best to sell his idea during the YIC in Kota Kinabalu.

“Another student that I feel I have positively impacted is Ahmad, who is currently a Form 5 student. Ahmad was labelled a “lazy” student as he loves to play truant and smoke, showing no interest in studies. What’s worse, he also often led his gang of friends to play truant with him. I realised then that he was a leader, but just not in the right way. I then slowly guided him to take responsibility in the class as a leader, and he started showing me his commitment when given a task. I even asked him to become the emcee for TFM Week (an annual event where external leaders are invited to co-teach with our Fellows in classrooms), and despite his reputation of being lazy, he spent a lot of time and effort practising the emcee script. Even though he has yet to pass English, there is definitely a positive change in his attitude. I no longer teach him, but he still helps me out in a variety of activities, sometimes even sacrificing his holiday and night-times. It has been a privilege to teach Ahmad, as this has taught me that every student deserves to be given an opportunity to grow and shine.” 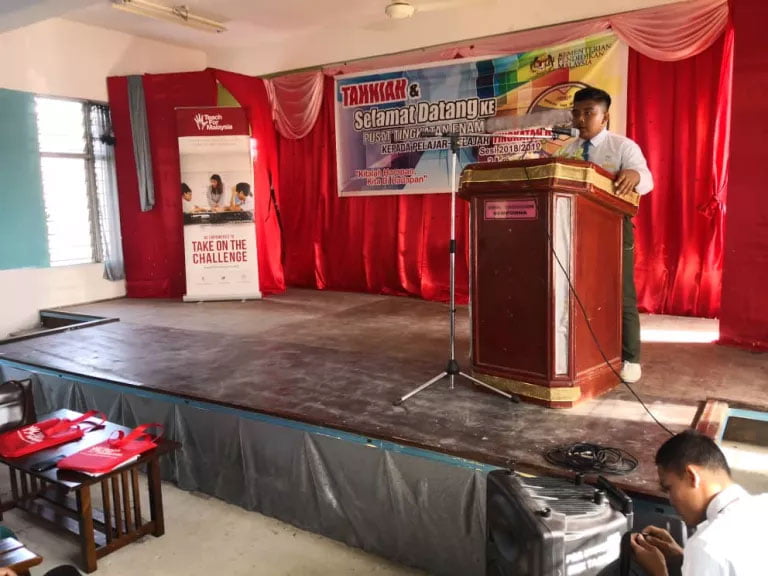 Ahmad emcees for the TFM week in his school, after being encouraged by Cikgu Desmond

Apart from teaching and developing students in his school, Desmond is now trying to create more impact in the greater community of Semporna. In December 2018, he ran a free Arduino workshop at the local library, which was attended by students from a community college in Semporna. Student mentors, who are students who Desmond had previously coached for STEM competitions, helped him with this workshop. In the future, he plans to run this workshop in other schools around Semporna, as well as organise the first STEM carnival ever to be held in Semporna. By doing this, he hopes to impact and expose more people in the community to the importance and potential of STEM for the future.

Being placed in your own state to serve the two-year Teach For Malaysia Fellowship may be a dream come true for many Fellows, but that doesn’t make the journey any less challenging. Desmond Tam, a 2018 Fellow, is experiencing that right now, as he completes his Fellowship in Semporna, Sabah.